We all know that china is the world’s leading manufacturer of steel and molds. It’s yearly output is growing year to year, even in time of past crisis.

Hereunder just some numbers we stumbled upon on Wikipedia:

In 2006, the export value of machinery ( Think of injection molds ) and transportation equipment made by Chinese suppliers reached 425 billion US dollars, 28.3 percent more than 2005..now back to mold  and die exports:

By 2015, China had become the world’s largest mold and die
market by volume and improved its global competitiveness
ranking in the industry to a top 10 position. Despite the
economic slowdown in the same year, China’s mold and die
market has grown 4.2% from the previous year achieving
an estimated market size of 20 billion Usd.

The injection , rota die-casting stamping and other Mold exports rose by around 3 % and equal to an amount of US$ 5 Billion, In contrary to the mold imports from companies such as Germany and US ( A decline of 4% /  worth US$ 2.5 billion. China mold and die products are exported to 190
countries around the world and over 700 mold and die makers
have annual exports exceeding US$ 1 million. This implies
that China mold and die producers are competitive on price,
comparative to suppliers in other markets. The acceleration in growth is mainly in highend  Chinese plastic mold makers and the development of high-end mold and die industrial hubs also shows that the China mold die industry is moving up the value chain 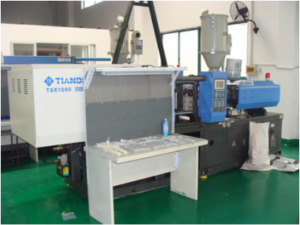