Traditionally, injection molding is often mentioned in the same sentence with the manufacturing of your parts in large series, ranging from production volumes of 10,000 parts to millions of pieces. In the early days of injection molding the technology was indeed only profitable with these large quantities.

In this article you will see that this requirement of mass production is no longer valid today. When the injection molding production is cleverly arranged in its full width, cost-effective production is also possible with relatively small production volumes. Sometimes with batch sizes under 1000 pieces.

A considerable part of the costs of your production process is made during the production of a mold. A mold is the hollow metal, steel or aluminium mold in which the hot, liquid plastic is poured during the injection molding process. Mat production is an essential but costly step towards a series of finished products.

One mold usually involves 300,000 shots, maintenance-free. Depending on the versatility of the mold, at least 300,000 products come from here.

This economies of scale made injection molding immensely popular within large-scale production. But for small series it was seldom profitable because of the high start-up costs that a mold brought with it.

You can significantly reduce the costs of your injection molding process by leaving the various steps of the production process to one and the same mold company. Because the deployment of various individual specialists involved unnecessarily high costs, the number of all-round injection molding companies has increased significantly in recent years.

Particularly when your injection molding partner has his own die or mould-making shop, the costs of mold production are very advantageous throughout the production process. In that case, your series can already be produced profitably at 1,000 pieces instead of the traditional lower limit of 10,000.

Naturally, the profitability of your series is a combination of several factors. In addition to mold costs, material costs, post processing, logistics and packaging also play a role. Therefore, consult your injection molding partner in advance with your general production requirements, so that you can get a clear picture of the suitability of injection molding for your intended product.

With vaccuum molding 25 pieces can be made with on silicone mold.

We are regularly asked whether 3D printing is a suitable alternative for the injection molding of small series. Although the technologies in this area are getting better, 3D printing is by no means sufficient for most products.

the price of filaments is still relatively high, although this is decreasing every year
the speed is low; tens of minutes is not uncommon, versus a few seconds per shot with injection molding
the deviations are greater than products produced in molds
the possibilities in material selection and finishing are still limited
3D printing is currently only preferred for extremely small series, or a few pieces. For this reason, 3D printing is very valuable in the prototyping phase. Thanks to this technique, an acceptable prototype can be manufactured quickly and cheaply. 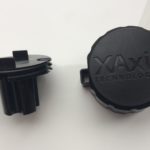